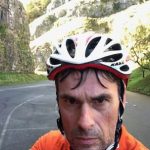 I set myself the target of riding up 100 hills, mountains, or kops over the course of the year, roughly two per week.  Most of the hills came from Simon Warren’s excellent series of guide books, starting with “100 Greatest Cycling Climbs”.  I also allowed myself to cycle up steep things that aren’t covered in any of his guides if they meet the criteria of being very steep and horrible; this let me ride climbs like Sa Calobra in Mallorca, and Tabayesco in Lanzarote.

I rode my first hill of the year on New Year’s Day – Swain’s Lane in Highgate, London.  It was raining, setting the pattern for virtually all of my UK climbing days (it was generally nice in Kent, but that was a rare treat for me).  I moved on to the Chilterns, then a work trip to Hong Kong gave me a chance to ride up The Peak.  Next were the Surrey Alps, some lumps and bumps in Oxfordshire, before heading out east to the short, sharp ascents of the Downs in Kent.  My favourite day on the bike of the year was in Flanders, Belgium where I ticked off a number of cobbled climbs like the Paterberg and Oude Kwaremont (I also got to see Paris-Roubaix live the next day).  Then up to the Midlands before a trip to Mallorca with my oldest friends.  I did not achieve a PB on Sa Calobra.  Boo.

West Sussex, Hampshire and “un jour sans” on the Isle of Man where I bonked into headwinds, got lost, and made the ferry home only by throwing myself under a closing barrier.  The Lake District threw up the hardest hill of my year – Honister Pass, which directly after Newlands Hause, had me seeing stars by the top.  The hardest hill was followed by the funniest – a client meeting in Bristol gave me a chance to ride up Vale Street, the steepest residential road in the UK.  On a hire bike and in suit and leather soled shoes which kept slipping off the pedals, it took me many attempts to get to the top.

Rides in Gloucestershire were followed by a day in the Manchester Peaks.  None of us managed to even get 5 metres up the cobbled Corkscrew on another rainy day, but we did tick off five great hills that day, including the Cat & Fiddle. Kent again with a chain-gang that was a stretch to hang on to, before more trips to the south coast, including the nasty Ditchling Beacon which will be familiar for anyone who’s ever done the London-Brighton bike ride.  A family holiday to Lanzarote let me ride up Tabayesco, the Ironman hill climb in the incredible volcanic landscape.

And finally this last weekend I did a couple of Bath hills, and ended up my year of 100 climbs by riding up Cheddar Gorge.  Not the steepest of the year’s efforts, but long, beautiful, and for somebody with Geography A Level, somehow very familiar from lessons in 1988.  You can see all of my climbs on Strava (follow Jim Leaviss).

Scouting For Girls perform at the Gala Dinner