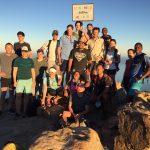 In March, Simon Brazier and his team from Investec scaled Lion’s Head, Devil’s Peak and Table Mountain: the South African three peaks. They climbed for over 9 hours in 95 degree temperatures. Despite the blisters, sore legs, slight dehydration (and surely a bit of sunburn) they were all smiles at the end. Well done guys.

In the summer, they then took on the British 3 Peaks.

Great job, and loads of valuable funds raised for CRUK.

Scouting For Girls perform at the Gala Dinner